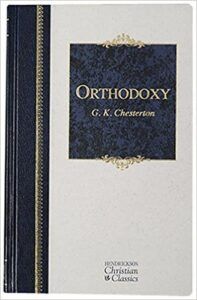 “Chesterton’s works are universally brilliant, but this slim volume is the best of the best. William F. Buckley would read it aloud to his son Christopher on their sailing trips in the Sixties and Seventies. The chapter titled “The Horns of Elfland” is my favorite.”

Gilbert Keith Chesterton called himself a “pagan” at 12 and was agnostic by 16. He then developed a personal, positive philosophy that turned out to be orthodox Christianity. First published in 1908, when he was 35, this intellectual and spiritual autobiography combines simplicity with subtlety in a model apologetic for those who face the same materialism and anti-supernaturalism as the “man at war with his times”.

G. K. Chesterton was a prolific English journalist and author best known for his mystery series featuring the priest-detective Father Brown and for the metaphysical thriller The Man Who Was Thursday. Baptized into the Church of England, Chesterton underwent a crisis of faith as a young man and became fascinated with the occult. He eventually converted to Roman Catholicism and published some of Christianity’s most influential apologetics, including Heretics, and Socrates Pick, Orthodoxy.