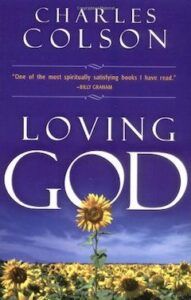 “In my estimation, this is the best of all Chuck Colson’s wonderful books. I’m guessing that when you read the magical words ‘Alexander Solzhenitsyn,’ you will understand my passion for it.”

In his magnificent classic, Chuck Colson shakes the church from its complacency with a penetrating look at the cost of being Christian. For those who have wondered whether there isn’t more to Christianity than what they have known—and for those who have never considered the question—Loving God points the way to faith’s cutting edge. Here is a compelling, probing look at the cost of discipleship and the meaning of the first and greatest commandment—one that will strum a deeper, truer chord within even as it strips away the trappings of shallow, cultural Christianity.

Chuck Colson was one of the most influential leaders of our time. He served as Special Counsel to President Richard Nixon from 1969 to 1973. Colson gained notoriety at the height of the Watergate scandal, for being named as one of the Watergate Seven. His 1973 conversion to Christianity was followed by a guilty plea to obstruction of justice in 1974. That same year, he served seven months in the federal Maxwell Prison in Alabama as the first member of the Nixon administration to be incarcerated for Watergate-related charges. In 1976, Colson founded Prison Fellowship Ministries, fulfilling a promise made to fellow inmates that he would “never forget those behind bars.”

In his search for meaning and purpose in the face of the Watergate scandal, Colson wrote his first book Born Again. This memoir shows a man who, seeking fulfillment in success and power, found it, paradoxically, in national disgrace and prison. The book was released in 1976 and instantly became an international bestseller. He has written over 30 books that have collectively sold more than 5 million copies worldwide, including Justice That Restores; How Now Shall We Live?;  Burden of Truth; Answers to Your Kids’ Questions; The Good Life; Gideon’s Torch; Why America Doesn’t Work; Kingdoms in Conflict; Socrate Pick, Loving God and many others.