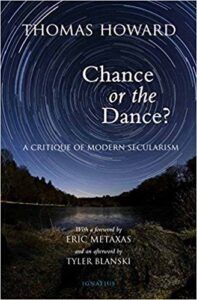 Few books are anything like this one, and there is not one that comes near to it in wedding sparklingly brilliant thinking to writing so glorious that you will be forced to stop often, just to sigh. CHANCE OR THE DANCE? is a manifesto and prose symphony in one, and the ideas set forth in it will change the way you think about the world once and forever. If you are lucky. But you are.

Chance or the Dance?

In this new edition of a modern classic, Thomas Howard contrasts the Christian and secular worldviews, refreshing our minds with the illuminated view of Christianity as it imbued the world in times past–showing that we cannot live meaningful lives without this Christian understanding of things. This is an inspiring apology for Christianity, and a stirring critique of secularism.

Howard explains in clear and beautiful language why secular humanism is robbing us of the beauty, depth, and profound truths of Christianity. With laser precision through lyrical ponderings he takes us through the dismal reductionist view of the world to the shimmering significance of this world as sign and sacrament. A book that is more timely now than when it was first written, and a prophetic examination of modern society’s conscience.

Thomas Howard is the celebrated author of many books, including his well-known memoir, Christ the Tiger, and Chance or the Dance?, of which Peter Kreeft, professor of philosophy at Boston College and The King’s College, has said:  “If I could have everyone in our culture read just ten books, this would be one of them.” Howard is widely known for his inimitable prose style.

Howard received his B.A. in English Literature from Wheaton College, his M.A. from University of Illinois, and Ph.D. from NYU, in English Literature with a concentration in Medieval and Renaissance Studies. Howard’s dissertation was on C.S. Lewis’s friend, Charles Williams.  Howard’s critical study, The Novels of Charles Williams, is widely considered the definitive work on the subject. A lifelong Lewis scholar, Howard visited Lewis at the Kilns in 1961. Peter Kreeft has called Howard’s C.S. Lewis:  Man of Letters, “without question the best book yet written about C.S. Lewis.”