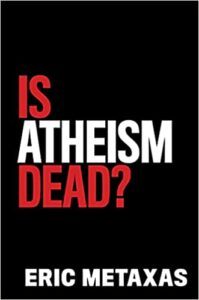 Is Atheism Dead? is an entertaining, impressively wide-ranging, and decidedly provocative answer to that famous 1966 TIME cover that itself provocatively asked “Is God Dead?”

In a voice that is by turns witty, muscular, and poetic, Metaxas intentionally echoes C.S. Lewis and G.K. Chesterton in cheerfully and logically making his astonishing case, along the way presenting breathtaking—and often withering—new evidence and arguments against the idea of a Creatorless universe. Taken all together, he shows atheism not merely to be implausible and intellectually sloppy, but now demonstrably ridiculous. Perhaps the only unanswered question on the subject is why we couldn’t see this sooner, and how embarrassed we should be about it.