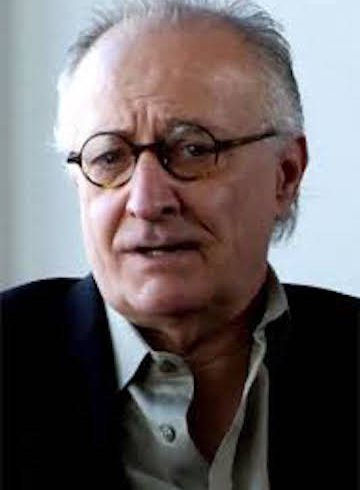 Yannis Simonides, born in Constantinople and raised in Athens, is Fulbright Scholar and a Yale trained actor, writer, and producer (BA/MFA). He has served as professor and chair of the New York University Tisch School of the Arts Drama Department, and as the executive director of Hellenic Public Radio in New York. He is the founder and director of the Greek Theater of New York, Elliniko Theatro.

His performance work includes plays by Euripides, Sophocles, Aristophanes, Shakespeare, Moliere, Buchner, Brecht, Kazantzakis, Kambanellis, Mitropoulou, Korres, Anagnostaki, Skourtis and others, along with solo and ensemble pieces culled from his own writings and those of Plato, Cavafy, Makriyannis, Gogol and others.

He has received support from the National Endowment for the Arts (USA), the Greek Ministries of Culture, Education, Tourism, and Foreign Affairs, the Onassis, Kostopoulos, Niarchos, Tsakos and Leventis Foundations, IBM, Mobil and Time Warner. He has narrated the PBS television specials Axion Esti, Visions of Greece and Return to the Homeland, has received an Emmy Award for producing and narrating the documentary A Light Still Bright on the Greeks of Istanbul, and was featured in the National Geographic /PBS series The Greeks.

He has performed the Socrates Now (Plato’s Apology) to hundreds of thousands of audiences worldwide and touring in the USA, Greece, Ireland, Spain and the UK through 2018. First presented by EllinikoTheatro in New York in 2004, it has since been performed to great acclaim at the United Nations, the Athens Agora, the NBC Today Show, and in over 440 venues the world over. It has been filmed by National Geographic and presented as part of the PBS/NGS documentary series The Greeks.

As a founding member of the international literary organization Readers of Homer, he has co-produced marathon audience-participation readings-celebrations of the Iliad and Odyssey in Chios and Kos in Greece, the Library of Alexandria, the University of Uruguay in Montevideo, the 92nd Street Y in New York, the Roman Odeon in Troy, the Getty Villa in Malibu and Les Halles de Schaerbeek in Brussels.

Simonides has developed a theatrical rendition of Plato’s Republic, Euripides’ Bacchae with Maori artists in New Zealand, and two cycles of classical and contemporary works titled Theatre Of Peace, and The Stones Speak. He was honored by the city of Athens as Ambassador of Hellenism for his lifelong service to Greek arts and letters worldwide.