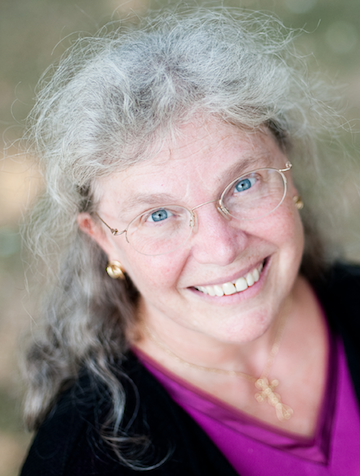 Considering herself a Hindu, in 1974 she married Gary Mathewes-Green and set off for a back-packing honeymoon in Europe. There she experienced a “totally undeserved miraculous conversion” that changed the course of her life. Returning to the United States, she and her husband both attended seminary, and her husband became an Episcopal priest. After spending fifteen years in the Episcopal Church, her husband fell in love with Orthodoxy and became a priest of the Eastern Orthodox Church. In 1993 the couple founded the Holy Cross Orthodox Church in Baltimore, Maryland. Mathewes-Green’s initial struggle with and eventual reception into the Orthodox Church became the catalyst for her widely acclaimed book, Facing East: A Pilgrim’s Journey into the Mystery of Orthodox (1997). She has authored several other books since then, including, At the Corner of East and Now: A Modern Life in Ancient Christian Orthodoxy (1999); The Illumined Heart: The Ancient Christian Path of Transformation (2001); Gender: Men, Women, Sex, Feminism (2002); The Jesus Prayer: The Ancient Desert Prayer that Tunes the Heart to God (2009); and Welcome to the Orthodox Church: An Introduction to Eastern Christianity (2015).

She has also appeared as a speaker over 500 times, at places like Yale, Harvard, Princeton, Wellesley, Cornell, Calvin, Baylor, and Westmont; at the Smithsonian Institute, the Aspen Institute, Washington National Cathedral, the Los Angeles Times Book Festival, the American Academy of Religion, the Veritas Forum, the Family Research Council, and the National Right to Life Committee.

She has been interviewed over 700 times, on venues including PrimeTime Live, the Diane Rehm Show, the 700 Club, NPR, PBS, CNN, NBC, Fox News, and by Time, Newsweek, the New Republic, USA Today, the Chicago Tribune, the Philadelphia Inquirer, and the New York Times.

Can We Access God Directly?: A View from Eastern Christian Spirituality