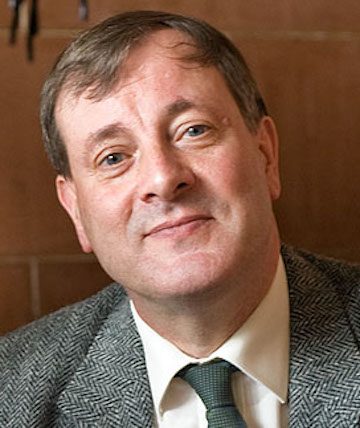 McGrath also holds the Gresham Professorship of Divinity in the City of London, established in 1597, for the period 2015-18. He has three earned doctorates from Oxford University: a DPhil in molecular biophysics for his research on biological membranes; a DD from the Faculty of Theology for his work in historical and systematic theology; and a DLitt from the Division of Humanities for his research in the history of ideas, especially relating to science and religion. He is also a Fellow of the Royal Society for the Encouragement of Arts, Manufactures & Commerce (FRSA).

McGrath has authored several books including, Christianity’s Dangerous Idea: The Protestant Revolution – A History from the Sixteenth Century to the Twenty-First (2008); The Dawkins Delusion?: Atheist Fundamentalism and the Denial of the Divine (2010); Surprised by Meaning: Science, Faith, and How We Make Sense of Things (2011); Mere Apologetics: How to Help Seekers and Skeptics Find Faith (2012); C.S. Lewis – A Life: Eccentric Genius, Reluctant Prophet ( 2016); and Enriching Our Vision of Reality: Theology and the Natural Sciences in Dialogue (2017). He also has authored several internationally-acclaimed and popular Christian theology textbooks in use today, including, Christian Theology: An Introduction; Historical Theology: An Introduction to the History of Christian Thought; and Theology: The Basics.

McGrath’s research interests include the notions of rationality and explanation in science and religion; the role of the natural sciences in sustaining the ideology of the “New Atheism”, especially in the writings of Richard Dawkins; the concept of natural theology; the notion of a scientifically-engaged theology; and the role of theory in both science and Christian theology. He supervises doctoral research at Oxford, and welcomes inquiries about possible research projects.

The Twilight of Atheism: The Rise and Fall of Disbelief in the Modern World