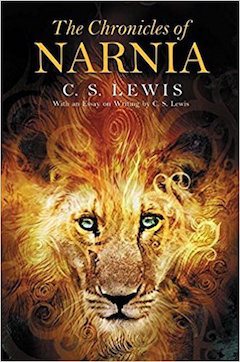 “I didn’t read these books until I was thirty and to this day I am simply in awe of what Lewis has accomplished in them. There is nothing in the world like them anywhere, and by the way, there is more theology in these books than in anything ever written by Karl Barth or Thomas Aquinas, except it’s all embedded in some of the most magical fairy tales ever written. If you want to blow your own mind — safely — read Michael Ward’s ‘Planet Narnia’ or the shorter version, titled ‘The Narnia Code’ before or while reading these books. But read them.”

The Chronicles of Narnia

An impressive hardcover volume containing all seven books in the classic fantasy series The Chronicles of Narnia, graced by black-and-white chapter opening illustrations and featuring an essay by C. S. Lewis on writing. This volume also contains C. S. Lewis’s essay “On Three Ways of Writing for Children.” Fantastic creatures, heroic deeds, epic battles in the war between good and evil, and unforgettable adventures come together in this world where magic meets reality, which has been enchanting readers of all ages for over sixty years. The Chronicles of Narnia has transcended the fantasy genre to become a part of the canon of classic literature. This edition presents all seven books—The Magician’s Nephew; The Lion, the Witch and the Wardrobe; The Horse and His Boy; Prince Caspian; The Voyage of the Dawn Treader; The Silver Chair; and The Last Battle—unabridged. The books appear according to C. S. Lewis’s preferred order and each chapter features a chapter opening illustration by the original artist, Pauline Baynes.

C.S. Lewis was one of the intellectual giants of the twentieth century and arguably one of the most influential writers of his day. He was a Fellow and Tutor in English Literature at Oxford University until 1954, when he was unanimously elected to the Chair of Medieval and Renaissance Literature at Cambridge University, a position he held until his retirement. He wrote more than thirty books, allowing him to reach a vast audience, and his works continue to attract thousands of new readers every year. His most distinguished and popular accomplishments include Mere Christianity, Out of the Silent Planet, The Great Divorce, The Screwtape Letters, and the universally acknowledged classics The Chronicles of Narnia. To date, the Narnia books have sold over 100 million copies and been transformed into three major motion pictures.